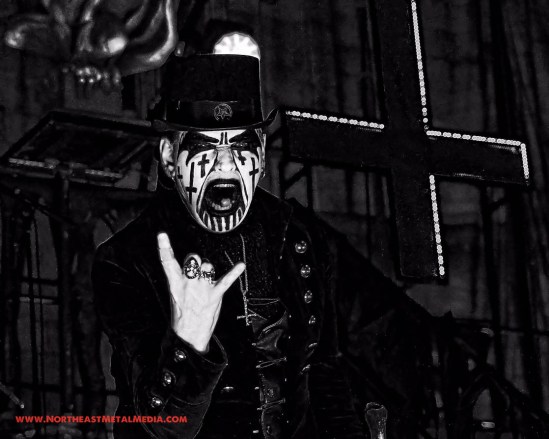 Mayhem…
That is the best way to describe this event every year and the press leading up to this festival this year. Founders and bands blaming each other for low ticket sales and supposed weak line up. This year I actually enjoyed the fact they had only one other stage then the main stage. A lot less running around or making decisions about who to see or miss because of overlapping stage times.

The day started when the gates opened at 1pm and the first band of the day hit the Victory Records Stage. A local band named “Dead By Wednesday” started the day out. This is one of the times, I am regretting not covering the local scene more. Nice solid well received set by one of Connecticut’s best and upcoming!

Following them was a Code Orange, a hardcore punk band out of Pittsburgh PA. A very energetic group with a bass player that was all over the place.

Shattered Sun hit the Victory Records Stage after that. Playing to a crowd that was definitely a lot bigger then at The Loft in Poughkeepsie only a few nights before. They did not disappoint at all.

Sworn In is a metalcore band out of the Chicago area, another young band out to make their mark and definitely show signs of it happening.

Sister Sin hit the stage after Sworn In and there isn’t much to say, They killed it. Another band I had the privilege of seeing and shooting a few days before. I wasn’t disappointed at all and I think they gained a lot of fans after this set.

Then came the death metal, Jungle Rot another Victory Records band hit the stage. Hailing from Kenosha WI, I have to think maybe the midwest isn’t so bad after all for a music scene. One of the older bands on this stage, they powered their way through the set.

Thy Art Is Murder out of Australia was up next, kinda strange to see the lead singer Chris McMahon come on stage with a soccer ball and wearing a jacket, considering it was late afternoon on a very hot and sunny day. Chris worked the crowd up like a pro and they showed why they are the best deathcore band from Down Under.

One more band hit the stage before the crowd started shifting between the Victory Records stage and the main stage and that was Whitechapel. They are a deathcore band from Knoxville TN, that is influenced by many different styles, from Metallica to Pantera to Cannibal Corpse, Slipknot and a whole lot more. Their popularity showed as the crowd screamed along.

It was now time to run back and forth between stages, The Devil Wears Prada hit the main stage shortly after the end of Whitechapel’s set and the seats started to fill. TDWP is another metalcore but with a twist, and that is their Christianity background. Kind of humorous considering they are sharing the main stage with the likes of Slayer and King Diamond. Another energetic performance with the lead singer Mike Hranica all over the stage.

Then it was back to the Victory Records stage for Kissing Candice.

Hellyeah took the main stage after the end of Kissing Candice’s set. At least the times were easy to manage and you didnt really miss any of the bands between the two stages. Hellyeah is a band that I believe most go out to see because of the Pantera connection in Vinnie Paul and Chad Gray from Mudvayne. Definitely a good stage show and some good metal.

The last of the bands on the Victory Records stage was on now, Feed Her To The Sharks. Another reason to rethink that the only good band to come out from Australia was AC/DC. Coming out in matching shirts, Feed Her To The Sharks regaled us with even more Aussie metalcore and closed out the Victory Records stage for the day. Sending everyone running for the main stage.

It was time for the King, King Diamond. Lead singer of Mercyful Fate and also a successful solo artist. King Diamond taught the crowd how things were done in the 80s and how to put on one hell of a stage show. Bringing out songs from his Mercyful Fate days and from the arsenal he has built up on his own over the last 30 years, King Diamond schooled us all in how to throw a concert! He brought the house down and I think should’ve been the headliner.

Speaking of headliners,It was now time for the perennial masters of Mayhem… Slayer, Tom Araya and Kerry King with Gary Holt and Paul Bostaph hit the stage to flames and strobes the crowd roared. The young bands on the Victory stage were shown by the masters of Thrash what it is to truly shred and where their roots lie.

People were upset with this year’s line up. Alot of people claiming it was weak. Yes it was different, yes there was less people, but I honestly thought after being there it was a great festival with some really huge talent and a lot of up and coming bands that will everyone will be hearing more from over the next couple of years! Hopefully, I didn’t witness the death of Mayhem.

All photographs are Copyright protected – Not for use without permission