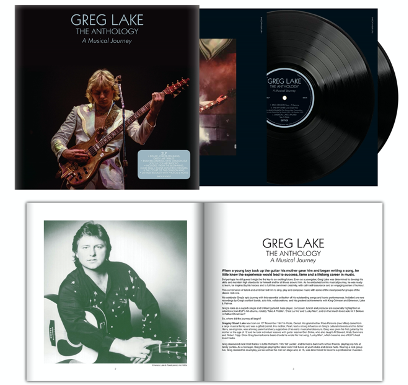 ‘The Anthology’ has many notable highlights: for starters there’s the hugely collectable Psych 45 ‘Love’ that Lake recorded in 1969 whilst with the Shy Limbs, alongside carefully curated treasures from ELP’s hit albums, notably ‘Take A Pebble’, ‘C’est La Vie’ and ‘Lucky Man’. No Anthology would be complete without that much-loved solo hit ‘I Believe In Father Christmas’, the inclusion of King Crimson’s ‘21st Schizoid Man’, ‘Peace’ and ‘In The Court Of The Crimson King’, plus Greg’s re-recording of the old ELP favorite ‘Closer To Believing’ which he made towards the end of his life and can be heard on CD2.

‘The Anthology’ is presented as a deluxe 2CD hardback set and on double gatefold vinyl. Inside is an extended essay from author Chris Welch alongside a host of unseen photographs alongside contributions from ELP manager Stewart Young and Greg Lake’s wife of 40 years, Regina Lake, and many heartfelt tributes from other friends and colleagues.

Gregory Stuart Lake was born on November 10th, 1947 in Poole, Dorset. Greg was given his first guitar by his mother at the age of 12 and he took individual lessons with guitar teacher Don Strike, who also taught Al Stewart, Andy Summers and Robert Fripp. Once Greg learned some basic chords he wrote his first song, ‘Lucky Man’, which would become one of ELP’s best loved tracks.

At 17, Lake joined the group Unit Four as lead singer and guitarist. Unit Four split up in 1965 and in 1966, Greg formed the Time Checks. His next group was The Shame, who in 1967 recorded a Janis Ian song, ‘Don’t Go ‘Way Little Girl’. Greg’s confident voice is unmistakable even then. After The Shame came The Shy Limbs who recorded two cult psychedelic singles in 1969, including ‘Reputation’ with Greg singing lead vocals on the B-side, ‘Love’. He was later invited to join The Gods, with Ken Hensley and Lee Kerslake, who went on to form Uriah Heep. Six months into a Gods’ residency at the Marquee Club in London, Greg returned home to Bournemouth where Robert Fripp had asked him to become lead singer and bass player with the band that was to become King Crimson.

On December 10th, 1969, at San Francisco’s Fillmore West during a U.S. tour, King Crimson were billed alongside fellow British group The Nice, led by showman organist Keith Emerson. When King Crimson arrived in San Francisco, members Ian McDonald and Michael Giles announced they were leaving the band. Greg and Keith met backstage and discussed a partnership that would lead to the creation of a phenomenal, ground-breaking new rock group that went on to conquer the world.

On their return to London, Greg left King Crimson and Keith quit The Nice. They recruited virtuoso drummer Carl Palmer, formerly with the Crazy World of Arthur Brown and Atomic Rooster, and Emerson, Lake & Palmer was born. Signed to Atlantic Records in America and Island in the U.K., ELP premiered at the 1970 Isle Of Wight Festival where a huge audience were left astonished by the dynamic arrangements from their self-titled debut album.

ELP soon achieved global success, unleashing a succession of Gold and six Platinum albums including Emerson, Lake & Palmer, Tarkus, Pictures At An Exhibition, Trilogy, Brain Salad Surgery, Welcome Back My Friends…To The Show That Never Ends and Works Volume 1. At the helm was Stewart Young, who became the band’s manager at the personal request of Greg Lake. Stewart and Greg remained close friends until the latter’s tragic death in 2016.

ELP took a break after Brain Salad Surgery and, in 1975, Greg’s ‘I Believe In Father Christmas’ became a number two solo hit in the UK singles chart. It has since become a perennial Christmas classic, often copied but never bettered. Stewart: “Greg had come up with this idea for a Christmas song. He told me: ‘I really love Christmas and it’s important to me’. He wanted to write one that wasn’t too sugary. When he got out his guitar and played me the song, I said: ‘Wow – it’s fantastic.’ Keith Emerson also loved it and suggested an idea that would work well with the song”. Keith inserted part of Prokofiev’s Lieutenant Kijé orchestral suite, with the familiar ‘Troika’ theme played on keyboards.

Following Greg’s solo success, in 1977 ELP released the album Works Volume 1, which had one side featuring Keith’s Concerto, one by Greg, another by Carl Palmer and a fourth by ELP with an orchestra. The tracks included Aaron Copland’s ‘Fanfare For The Common Man’ and Greg’s haunting ballad ‘C’est La Vie’. In 1978, after enormous worldwide success, the release of studio album Love Beach and a farewell tour, ELP broke up. While Love Beach is regarded by many as untypical of ELP’s style, it included some songs sung with tenderness and strength, notably Greg’s ‘For You’.

In 1981 Greg released an acclaimed, eponymously titled solo album. Lead guitarist Gary Moore joined the band and they went on tour. A concert they recorded at Hammersmith Odeon in London, on 5th November 1981 featured an incredible version of King Crimson’s ‘21st Century Schizoid Man’, which is included on this Anthology. In 1983, Greg released his second solo album, Manoeuvres, that yielded ‘Haunted’, a ballad he sang with considerable emotion, and the achingly beautiful ‘Slave To Love’.

Eager to revive the spirit of ELP, Keith and Greg teamed up with drummer Cozy Powell, as Carl Palmer was involved with Asia and unavailable. They released Emerson, Lake & Powell in 1985, a record that included the magnificent ‘Touch And Go’.

The original ELP, with Carl Palmer, then reunited for the Black Moon album in 1992. A subsequent tour captured on an exciting 1993 live album. Paper Blood revealed an ELP determined to rock out and reach a new generation of fans. The band embarked on a successful tour of America but lapsed into inactivity later in the decade. Determined to stay musically active, in 2001 Greg toured with Ringo Starr’s All-Starr Band and in 2005, the newly formed Greg Lake Band toured the UK with Brett Morgan (drums), Trevor Barry (bass), Florian Opahle (guitar) and Dave Arch (keys) playing new interpretations of ELP classics.

In 2009, Greg and Keith decided to write together and, in the breaks, played some old ELP numbers for fun. They were intrigued by how they sounded with just the two of them, taking the songs back to their roots. A US tour followed, yielding a live album that included ‘Bitches Crystal’, ‘The Barbarian’ and ‘Take A Pebble’. In 2010 the final appearance by the original ELP came at the High Voltage rock festival held in London’s Victoria Park.

In 2012 Lake embarked on his ‘Once In A Lifetime’ Tour where one of favorite gigs was recorded live at the Teatro Municipale, in Piacenza, Italy. In 2014, Lake was diagnosed with pancreatic cancer. Stewart: “I went to see Greg just four days before he passed away. He was obviously in terrible shape, but I took a little portable player with me and his new album Live In Piacenza that he’d recorded in Italy. I’d also got the final mix of his new version of ‘Closer To Believing’, which I thought was fabulous.” Stewart asked Greg if he’d like to hear the track, even though they were in a hospice and the music was quite loud. Should he turn it down? Greg replied: “Well it’s only four o’clock in the afternoon – turn it up!”

“And he loved it. This was four days before he died.” 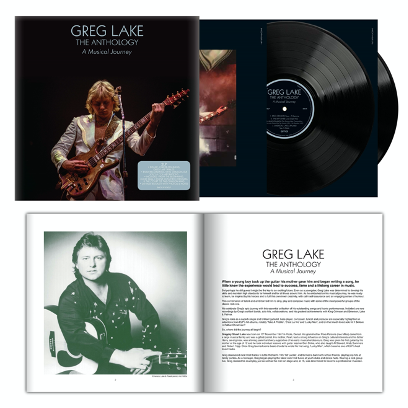 1. King Crimson – Peace – A Beginning
From the album In the Wake of Poseidon by King Crimson, 1970

4. King Crimson – The Court of the Crimson King (Live at the Fillmore West, San Francisco,
From the album Epitaph by King Crimson, 1997