Photos and Interview by Michael LaFleche

CAMBRIDGE, Mass. – Bewitcher was in town for a show at the Sonia in Cambridge on Monday night for a show along with other great hardcore metal acts Exhumed, Creeping Death and Enforced. I had a chance to sit down over a couple of Hot Toddies next door at the Middle East with Matteo Von Bewitcher and Andreas Magus for a chat about being back on the road touring, what happened over the lockdown with the band and their thoughts on the scene and what inspires them musically.

So of course, I ask probably what is the lamest question in the world of the band, “What is the last album that you listened to that wasn’t your own?” It really does tell you a lot about the person and the band. “Spice Girls greatest hits” of course A. Magus and Mr. Von Bewitcher exclaimed. I think they were having a little fun with me. But that told me a ton about who they are and could not have been more happy to dive in on that and how I recently reviewed Tiffany of late 80’s pop fame, and that she is pretty much a member of LA Guns now, so anything can be cool!

Now I get into some serious questions. “So when it comes to making music, what is a weird thing you guys do when you sit down and write a song that might be different then other groups? But the last year or two of lockdown really helped build more refined and better music for the band. I really liked the intro to their latest album “Cursed by thy King” the track is entitled “Ashe” and it sounds so much like a Quentin Tarantino western theme song. But it is really refined, and as it leads into the meat of the album starting with the furiously tempoed “Death Returns” the band continues to show how a 3-piece unit can sound crisp, tight and explosive when the time comes. The band described having a bit of extra time to record as a real benefit to really finishing songs properly and it shows.

Andreas and Matteo went on to talk about getting back on the road this year. “Some cities and venues really still know how to attend a metal show, the fans really enjoy being out and doing what should be done at a show, getting into it, threshing, head banging, ect… But some places have seen a reluctance to fully participate naturally with the restrictions and the stress of the past year. Luckily, Boston seemed to be in a metal mood Monday night as I had a chance to see the show and review the performance with photos here. The venue did a great job to ensure everybody felt as safe as possible.

I always want to know what foundation a band focuses on as their inspiration. “Motörhead” immediately proclaimed. “I’m really obsessed with late 70s and 80s heavy metal, Priest, and NWOBHM “New Wave of British Heavy Metal” acts. But also local Portland based acts as well, some Grindcore stuff, Agent Orange.”

After we had drinks, I had the chance to see them live, the second act of the night after Enforced, which was really a great way to start the show with extreme levels of guitar, drums and energy. Bewitched, being a three piece unit, sounded just as loud, and I really enjoyed their selection of bass and drum heavy rhythmic heavy metal. It really did remind me of Motorhead slams together with Priest with a little bit of the themes of King Diamond and Ghost mixed in. The music is very accessiblble, but makes not apologies for being hardcore and true heavy metal. One of my favorite songs in the set was from their latest album, the song “Satanic Magick Attack”; it has an insanely contagious hook. But the guitar work of Von Bewither and vocals were awesome, drumming provided by Rand Crusher and Bass, vocals and attitude provided by Mr. A. Magus. The band is still on tour and dates can be found at https://www.bewitcher.us. I really would like to thank the band and management for hanging out for a quick chat and inviting me to cover the show. I highly recommend that you give their work a listen and see them if you can. 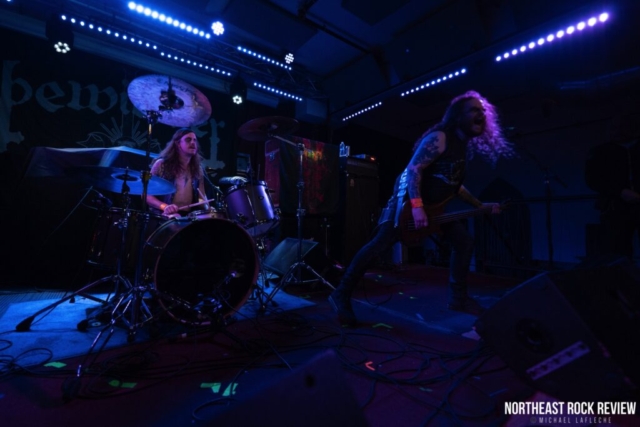 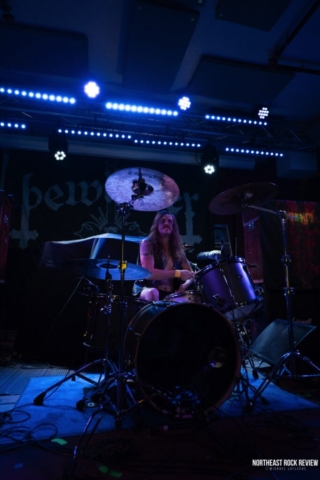 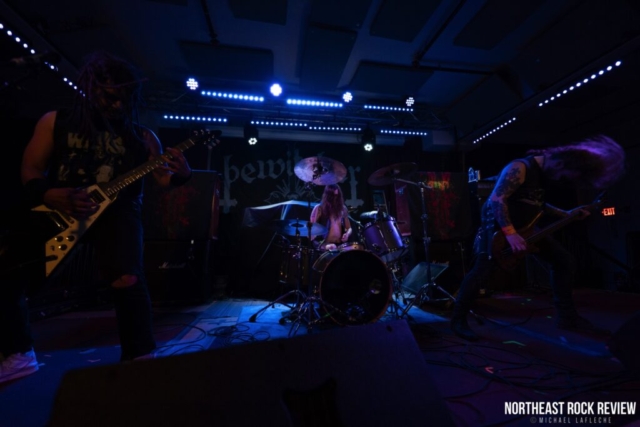 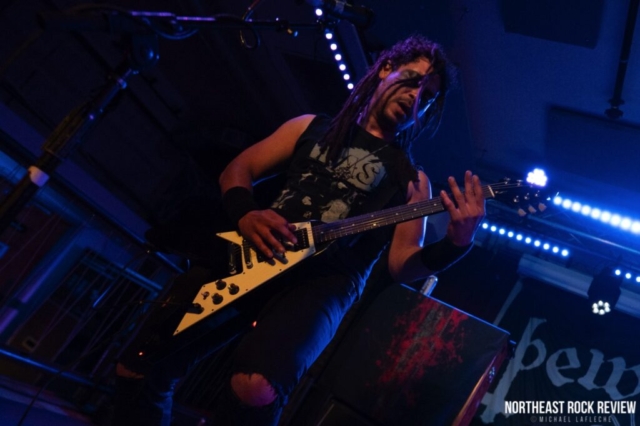 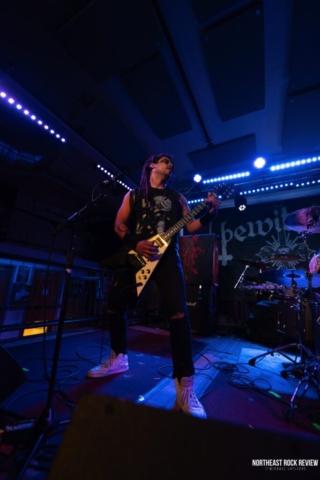 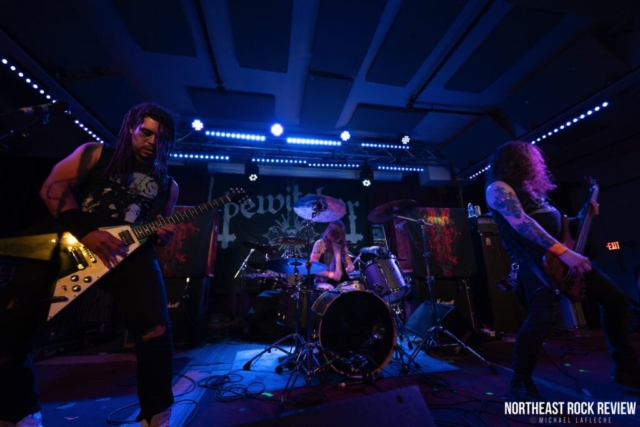 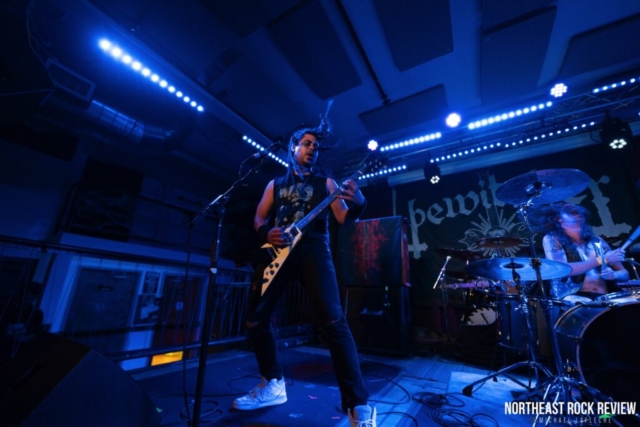 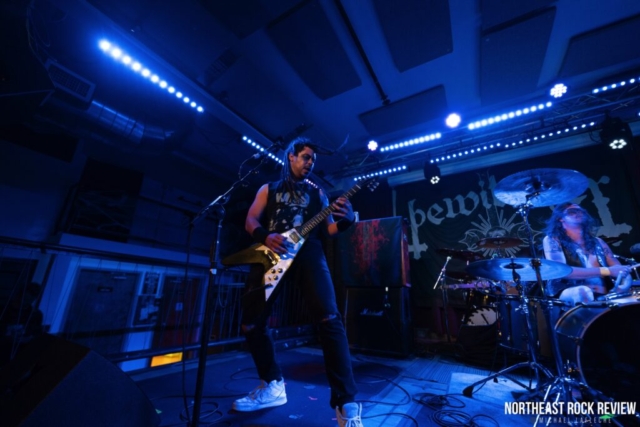 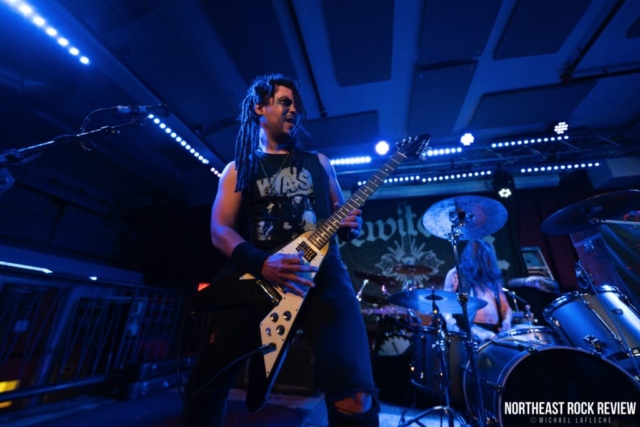 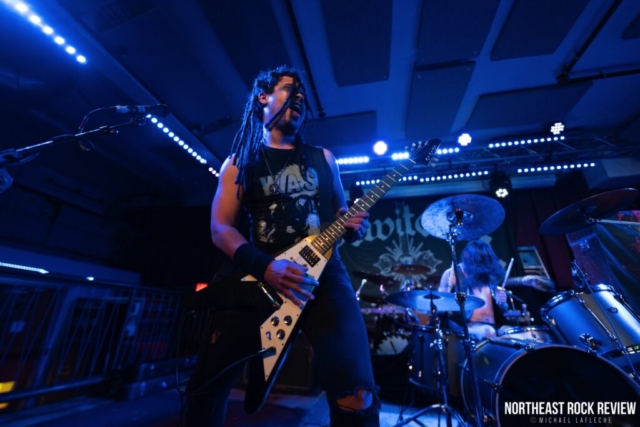 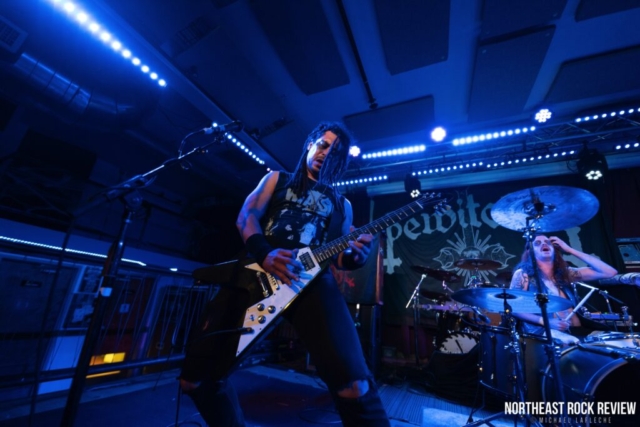 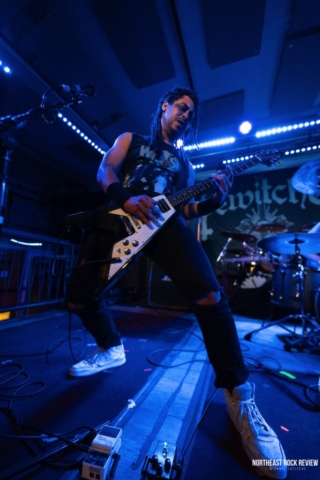 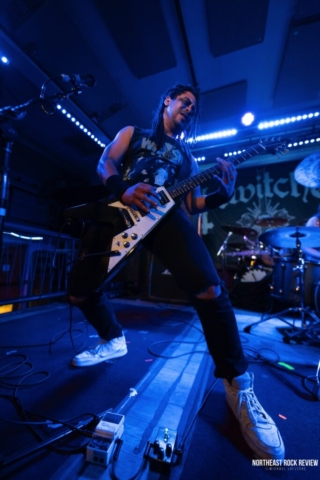 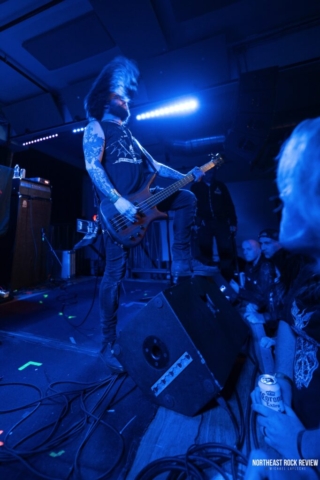 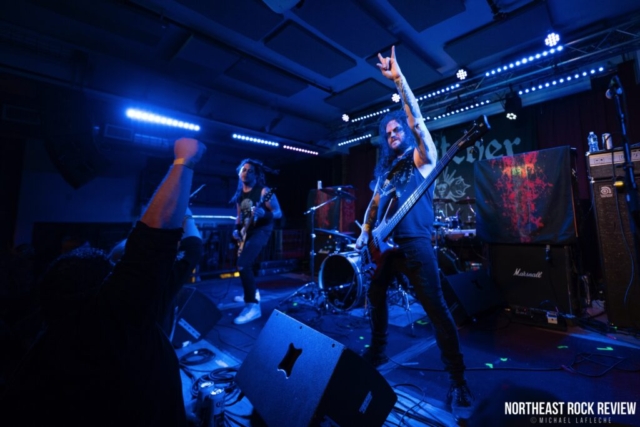 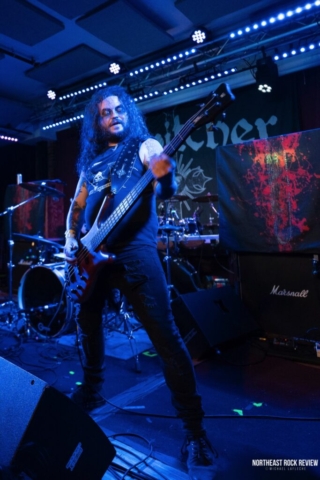 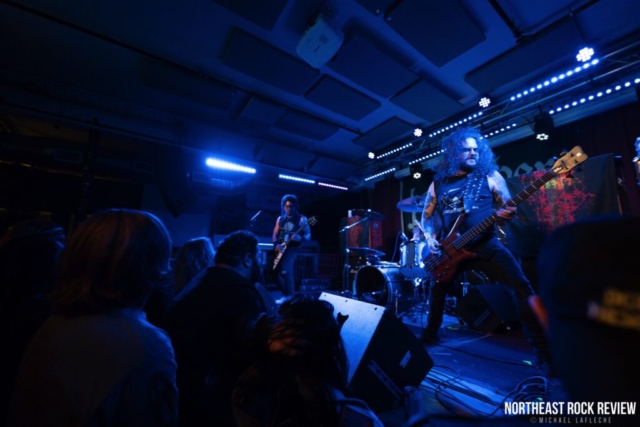 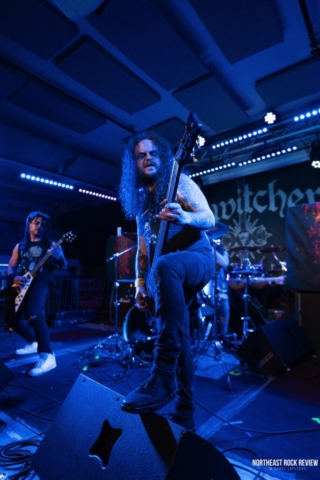 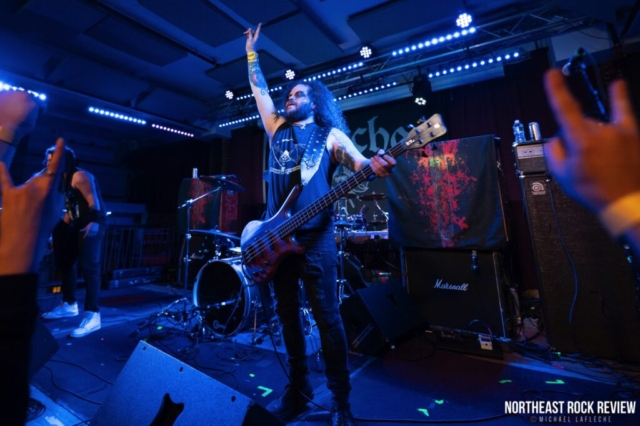 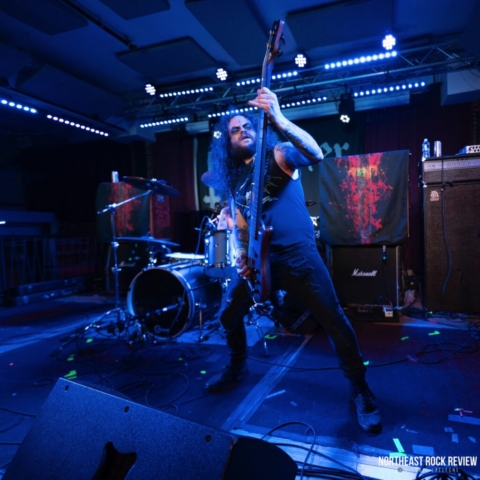 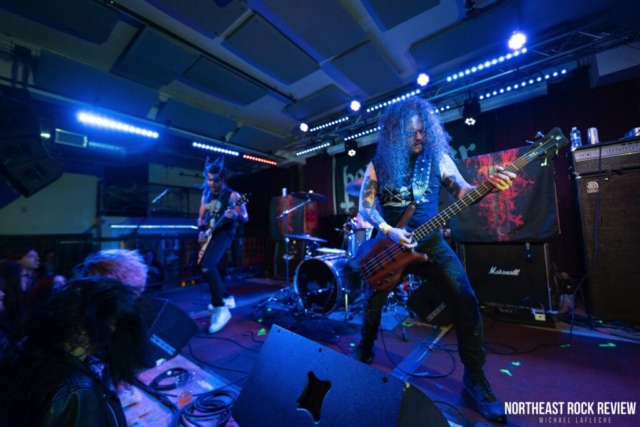 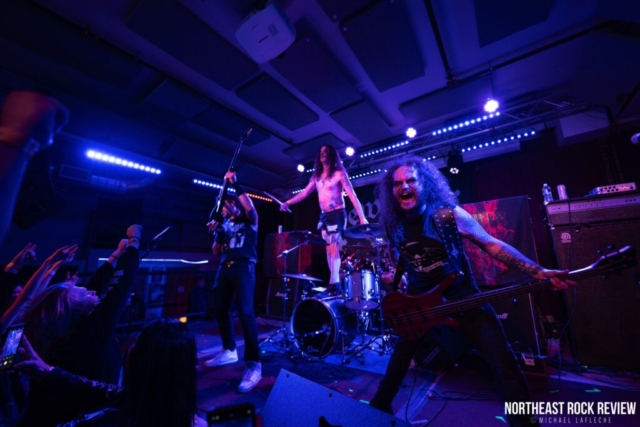 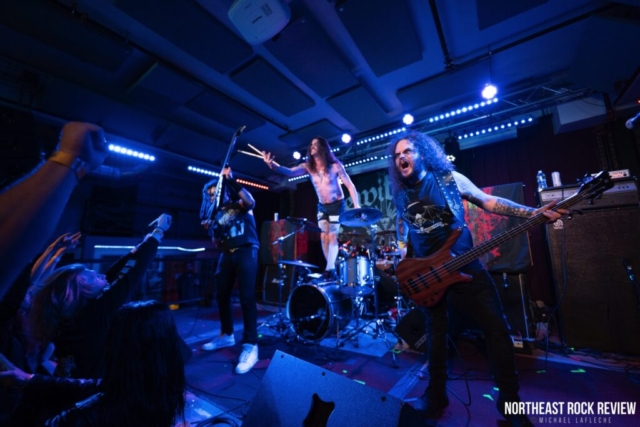 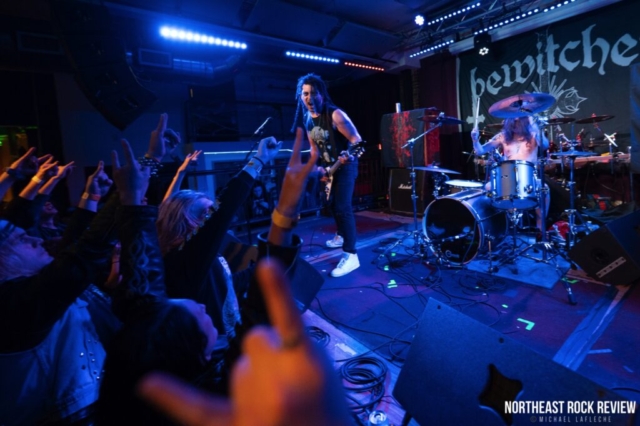 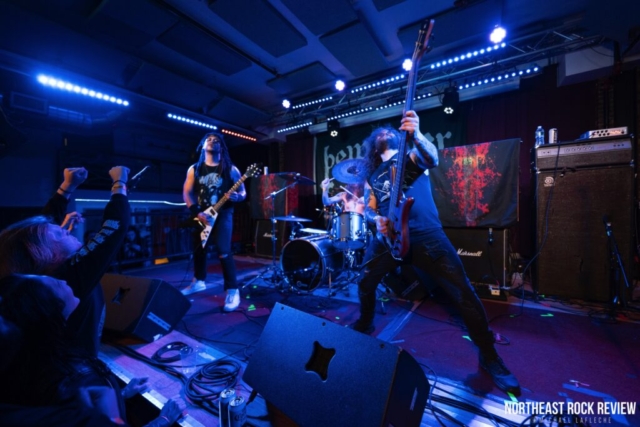 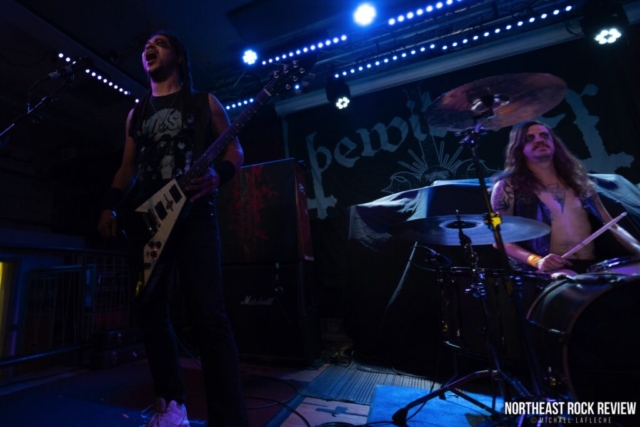